The Continuous, the Discrete and the Infinitesimal in Philosophy and Mathematics (2020) John L. Bell 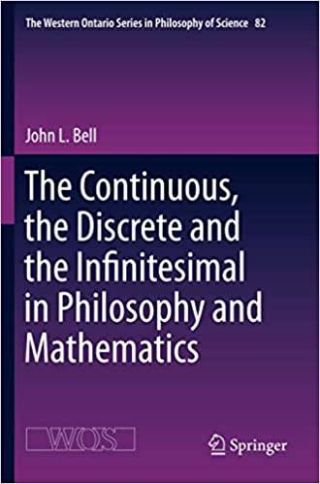 This book explores and articulates the concepts of the continuous and the infinitesimal from two points of view: the philosophical and the mathematical. The first section covers the history of these ideas in philosophy.  Chapter one, entitled ‘The continuous and the discrete in Ancient Greece, the Orient and the European Middle Ages,’  reviews the work of Plato, Aristotle, Epicurus, and other  Ancient Greeks; the elements of early Chinese, Indian and Islamic thought; and early Europeans including Henry of Harclay, Nicholas of Autrecourt, Duns Scotus, William of Ockham, Thomas Bradwardine and Nicolas Oreme. The second chapter of the book covers European thinkers of the sixteenth and seventeenth centuries: Galileo, Newton, Leibniz, Descartes, Arnauld, Fermat, and more. Chapter three, 'The age of continuity,’ discusses eighteenth century mathematicians including Euler and Carnot, and philosophers, among them Hume, Kant and Hegel.

Examining the nineteenth and early twentieth centuries, the fourth chapter describes the reduction of the continuous to the discrete, citing the contributions of Bolzano, Cauchy and Riemann. Part one of the book concludes with a chapter on divergent conceptions of the continuum, with the work of nineteenth and early twentieth century philosophers and mathematicians, including Veronese, Poincaré, Brouwer, and Weyl.

No other book so thoroughly covers the history and development of the concepts of the continuous and the infinitesimal. (The Western Ontario Series in Philosophy of Science, Band 82). Springer Verlag.