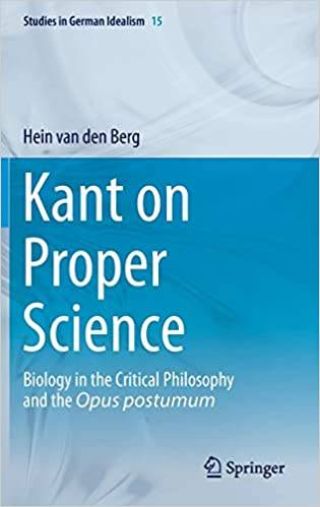 This book provides a novel treatment of Immanuel Kant’s views on proper natural science and biology. The status of biology in Kant’s system of science is often taken to be problematic. By analyzing Kant’s philosophy of biology in relation to his conception of proper science, the present book determines Kant’s views on the scientific status of biology. Combining a broad ideengeschichtlich approach with a detailed historical reconstruction of philosophical and scientific texts, the book establishes important interconnections between Kant’s philosophy of science, his views on biology, and his reception of late 18th century biological theories. It discusses Kant’s views on science and biology as articulated in his published writings and in the Opus postumum. The book shows that although biology is a non-mathematical science and the relation between biology and other natural sciences is not specified, Kant did allow for the possibility of providing scientific explanations in biology and assigned biology a specific domain of investigation. Springer Verlag.