Thought and Logic: The Debates between German-Speaking Philosophers and Symbolic Logicians at the Turn of the 20 th Century (2005) Jarmo Pulkinnen 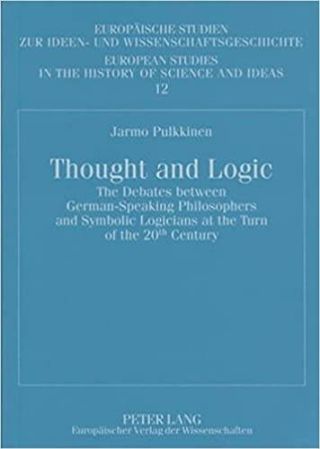 The book deals with the reception and critique of symbolic logic among German-speaking philosophers at the turn of the 20th century. The first part discusses the period from the late 1870s up to the end of the 19th century. The main issue is the arrival of the Boolean algebra of logic in Germany and Austria. It examines also the reasons why Gottlob Frege was so unsuccessful in his attempts to draw the attention of philosophers to his logicist programme. The second part deals with the first two decades of the 20th century. Its main topic of inquiry is the reception of Bertrand Russell’s and Louis Couturat’s ideas in the German-speaking world. In particular, it concentrates on the relationship between Russell and neo-Kantians. Peter Lang Verlag